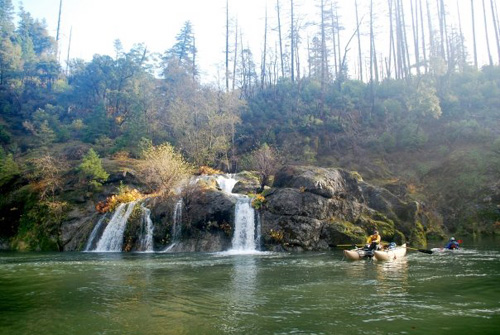 Trip report written by Brent Davis. The flow peaked somewhere around 2750 CFS @Kerby on this trip, although for the most part we were ahead of this bubble. Four of us ran, one raft, one cat, and one hardshell. We launched at 10:30 on Sat. with the gauge at 880 cfs and falling. It was fairly warm and sunny and the creeks were running pretty high from melting low elevation snow deposited on Friday. We planned on camping at either South Bend or just below Green Wall. The views were fantastic in the bright sun with wisps of cloud hanging on snow capped ridge lines. After lunch in the sun across from Pine Flat, we headed for South Bend and arrrived at about 2:45 to find a very large bear hanging out, so we abandoned any thought of camping there, skipped the customary break and headed to Green Wall for the scout.

The gauge was reading 830 cfs at 3:00, but Green Wall looked more like 1100 cfs and the hole at the bottom was starting to get serious, so we chose the line to the right of it and had smooth runs. We all took the center chute at the top ledge. Dan made it look easy in a kayak, I’ve never seen anyone boat through Green Wall looking so relaxed. Will ran down the right side of the middle section and entered the bottom slot moving right to left, easily clearing the wall at the bottom. I ran down the left side of the middle section (skipping a series of large breaking waves) and entered the slot moving left to right, I had to stand on the oars pretty hard to miss the wall at the bottom by a few inches. In five Illinois trips it was my first clean run of Green Wall.

We camped at the 2nd eddy on the left below Green Wall. There’s room for maybe 4 boats, 4 or 5 tents and a small kitchen, but if you’re there in the rain, beware of seepage and run-off. It rained for about 6 or 7 hours Saturday night. The kitchen had a soggy floor from seepage and Will woke up in the middle of the night with a creek running under his tent, but we woke up in the morning to mostly blue sky. I perched on a rock and sipped my coffee as dawn illuminated Green Wall, it was nice to be viewing it from below. This would probably not be a good camp to get stuck in during a high water event.

The river came up over night and we could tell it was rising all morning as we watched the rocks on the top ledge of Green Wall become submerged. We guessed it looked 2000ish by 10:00 when we left camp (the rock on the far right at the top ledge was still exposed on the downstream side), but the gauge was reading 2360 cfs. We had a great run out with some sun, fast water, and lots of play spots. We hit Oak Flat at about 12:30 for an easy afternoon drive home.

I recommend having at least one person in your party scout the bottom hole at Green Wall. Our right line from Sat. tightened up by Sunday morning with a violent, exploding surge on the right side of the slot and a much bigger reversal to punch at the bottom. The hole itself became much bigger. At some point you can sneak left of the hole, but you’d need to know where you want to be and confident that there is enough water to get to the left of a rock positioned directly above.