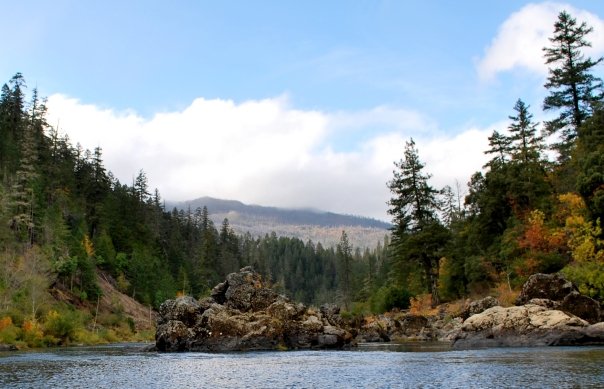 I had heard of “Big Falls” on the Illnois but had not seen it. I figured that, now having moved to Selma, I might as well take an IK and check it out. Pete Wallstrom of Momentum River Expeditions traveled from Ashland and we ran a shuttle and then put in at the Lower Six Mile access-point. The flow was around 15o-ish CFS in Kerby so it was pretty slow going. In total: 3.5 miles in just under three hours. But most of the time was spent drifting through flat pools, staring through the crystal clear water, watching salmon head upstream, and gawking at the scenery.

In terms of rapids, obviously there is “Big Falls” (which we portaged river-left), but there is also one other some-what steep fast riffle. At higher water it would be interesting to see what this would turn into. On this run, we just lined up on river right, squared to a very small lateral, and shot through the slot. Big Falls is impressive and, although it has been run, I wouldn’t be up for it. Especially at this flow where, as Pete pointed out, some of the drop was landing on a rock at the base of the flow. Furthermore, there’s an undercut on the river-left wall, which is where quite a bit of the water ends up going – that is unless you opt to land on the rock.

We took out at McCaleb Ranch, where there is a road coming down the canyon from the Illinois River Road. 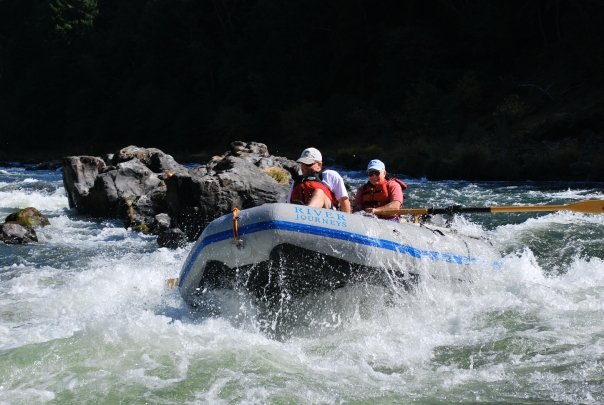 October is a great month to run the Rogue. Leaves turn color, lots of wildlife, fewer people, and fun flows are all great reasons to see the Rogue in the fall. This year, we used a Rogue River Journeys October launch as an “all-lodge” trip. On the first night we stayed at Black Bar and our second night was at Paradise. On the trip were Steve W. (ARTA), Joe D., Dick L., and Rachel L. (ECHO), Greg H. and Jack (Far-Flung), and Will V, Bob V, and Dana W. (KRO and IORJ). We had a great time floating, bloating, and telling stories.