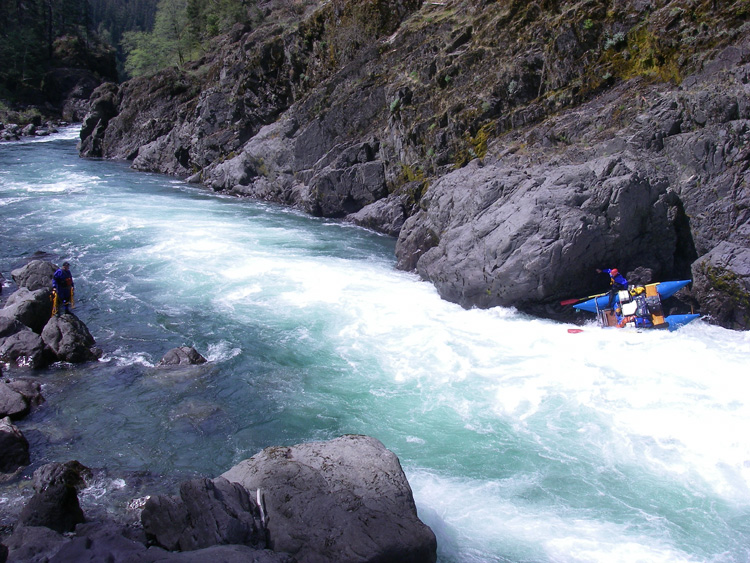 On April 25th, the SOU Whitewater Club launched on the Illinois River with a blistering sun in the sky, promising flows, and four Illinois virgins. In our group we had six SOU students, former SOU student Dan Thurber, and Alan Jones from the Portland area. Amazingly and despite the weather and flows, no one was at the put-in when we arrived. We cruised down to Pine Flat for the night and waited for the sun to go down. Later in the evening, a two boat trip went by and stopped at Pine Flat Right, just around the bend from where we were.

The next morning the sun broke through the few clouds that there were and began to heat up the canyon. It was so warm that I decided to not even throw on a dry suit, a first for me on the Illinois. Right now I kind of wish I had, given the massive sun burn all over my body. Nevertheless, a day like this on the Illinois is hard to come by, so we soaked it in and headed downstream.

At South Bend we stopped for lunch and a breather before Green Wall. Alan hadn’t been down the Illinois yet this year but had heard about the “new” hole at the bottom of Green Wall. I was curious what it would like as well at this flow so we planned to run the entry rapid and eddy out before the first drop. So much for plans. My boat made one of the weakest attempts at catching an eddy that one will ever see, and before I knew it Emilie and I were waiting at the bottom of the rapid. Alan caught the upper eddy, but when moving to a lower one he bumped a rock and headed downstream. We saw him drop through the first part just fine but at the bottom he went into the meat of the hole and was pulled back in for a big surf. He was there for awhile but some how stayed in his boat, which popped out next to the wall and came bouncing into the eddy next to us.

Dan was rowing a stern frame with four paddlers and had caught the eddy with no problems. At this point, the two folks from the two boat trip had walked down the entire entry rapid and had watched my boat miss the eddy, had watched Alan get surfed in the bottom hole, and were now about to watch Dan and his crew nearly get swallowed as well. Dan and his crew had a good line though, caught a little piece of the hole at the bottom, but flushed through just fine. Dan ran back upstream to see if the other trip would like us to hang around which they, after seeing our less-then-ideal runs, thought would be a good idea.

The first cat didn’t make it to the first drop without trouble. He was surfed in a hole in the entry and got separated from his boat. Somehow, he caught it and climbed back in while going over the first drop. His oars were out and he continued downstream as resident high-sider before dropping into the big hole at the bottom. Luckily, Dan was able to snap photos of the run… and cat boater #1 was safe and sound at the bottom of the rapid. 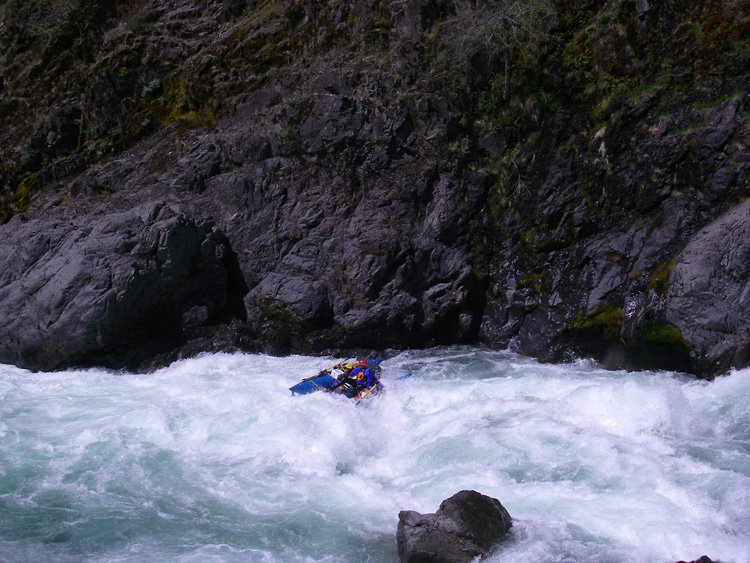 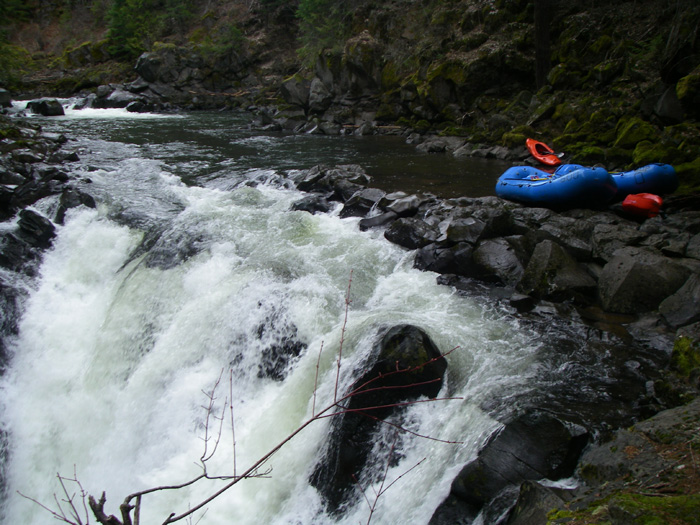 A big “thanks” to Ryan Morgan of Molalla, Oregon, for convincing us to do this run. He has an excellent kayaking and photography blog at http://molallakayaker.blogspot.com. Also, the SOU Whitewater Club and Outdoor Program helped with equipment, so thank you all! Dan Thurber also has a kayaking blog at http://h20cycle.blogspot.com that is certainly worth checking out for trip reports and random stories.

A week prior to this trip I called Ryan to see if he would be interested in doing some boating and we tossed around the idea of an Upper Wind trip. Andrew Wilkin, a fellow guide for Idaho River Journeys and Kyle Smith, a guide for Kern River Outfitters, were phsyched to see a new stretch of river and committed to making the drive from Moscow, Idaho. The Wind started to look like it was going to be too low so Ryan came up with Plan B: The Green Truss section of the White Salmon. Although it’s been rafted a handful of times, it is still considered a rare run for rafts but I imagine it will begin to get more popular as more and more folks see video and photographs of this beautiful stretch of river.

There was only one problem with Plan B, and that was the fact that we needed to find one more paddler so that we could have two R2 boats. I couldn’t find anyone in Ashland who was game so I gave the task to Andy and Kyle. A little bit later they called me back and said that they had found someone, Nick, who was up for it. They said that he had “some” boating experience and was excited to join us. That sounded good to me so our Plan B was now Plan A and we were set to go.

We met at Husum Falls on Friday morning. The gauge read just a touch over 2.5 feet. It took some time to get the boats down to the river but it did warm us up a bit which was nice considering the chilly weather. Ryan had been down a few times before so he led the way. We stopped to scout a lot. Bob’s Falls was the first significant drop we came to and Dan Thurber proved that the hole is indeed retentive. He ended up swimming but was able to get to shore with his kayak before the next drop. Shortly after, we came to Big Brother, an intimidating 25 foot waterfall that has a nasty cave river right at the bottom of the drop. For Nick and I, this was a sure portage. After mulling it over a little bit, Smitty and Andy decided to go for it. Ryan dropped in first with a stellar line and shortly after the raft approached the lip and styled the waterfall as well. Dan portaged around the drop and soon we were ready to push off and hit Little Brother, a 14-foot waterfall just downstream.

After styling Big Brother, we were surprised to see Andy and Smitty drop in a wee-bit sideways over Little Brother. Andy popped out and got some serious down time at the base of the falls. He re-emerged shortly and swam to shore with a little bump on his head and a story of getting slammed into the rocks at the base of the falls. After a short break we continued on to Double Drop and the Zig-Zags. Lower Zig Zag presents a serious hazard with two logs, one vertical and one horizontal (a few feet underwater in the left channel), in the main channel. The move to avoid the logs is easy enough but the consequences of swimming are serious. Portaging, however, seemed like a huge task so we buckled up and went for it. Thankfully we didn’t have any problems. There were a few fun rapids between the Zig Zags and BZ Falls but nothing of real consequence. We had made the decision before launching that we were all going to portage BZ Falls due to the cave thing behind the falls that is nasty. Instead of lining or portaging, we just pushed the boats into the current and they ghost-boated themselves with perfect lines over the drop. Kyle and I jumped in after them and got to the take-out shortly after.

After huffing all of our stuff up to the parking lot at BZ Corner and running the shuttle, we sat around and talked about the run. Certainly one of the most beautiful canyons I have seen and the whitewater was great. It was at this point when someone turned to Nick and asked “what was the most difficult stretch of water you had run before today?” He replied “I don’t know, maybe the Grand Ronde in Oregon.” I wouldn’t say that if you have run the Grand Ronde (class II+) you can run the Green Truss, however on April 4th that statement proved true.