Run DescriptionGuidelinesFlow InformationArchives
Run Description
It is important to note that the Illinois’ flow can fluctuate very quickly. Pay attention to the local weather forecast and only use the North West River Forecast as an estimate. Many times the Illinois has spiked well over the estimated forecast flow. The Illinois can go from mellow flows to dangerously high flows overnight.

A lot of people talk about running the Illinois. Not so many do it. The trouble is not so much access, but more so water and weather. During the summer the river runs as low as 40 CFS (and I’m not missing a zero). During the winter it sometimes peaks at 45,000 CFS. Any other time it will be running somewhere between those two. Below 500 CFS it gets incredible bony and, depending on the size of your boat, you may be performing at least one portage (first drop at Green Wall). Above 3,500 CFS the river offers big, fast, and continuous class IV rapids with a Class Vish feel. 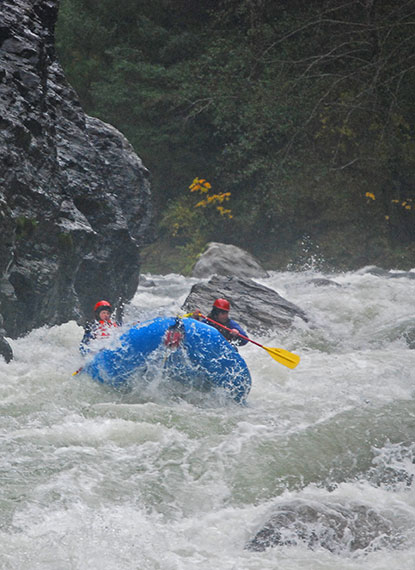 Aaron Babcock and crew head towards the bottom drop of Green Wall on the Illinois River.

A typical trip on the Illinois starts at Miami Bar. You can get there by turning onto the Illinois River Road in Selma. In Selma you should also fill out a permit (self-issued at Ray’s Market). It is wise (although not cheap) to pay for a shuttle. Depending on snow conditions, Bear Camp road (also used for the Rogue shuttle) may be open. If it’s not, you’re in for a long drive down to California, north to Gold Beach in Oregon, and then up the Rogue until you hit the Illinois (about 3 hours one-way) to get to the take-out.

Pushing off from Miami Bar you’ll find about three miles of easy water. Labrador Creek Rapids is the first set of fun boogie-water. At flows above 3,000 CFS, there are some huge waves and some big holes in this section. Another few miles downstream you’ll come across York Creek Rapids and then Clear Creek. Pine Flat makes for a great camp and a relatively short day (8 miles). Another mile or so downstream is Klondike Creek and this is another camping option. There are a few sandy beaches between Pine Flat and Klondike which work as camps as well. About a half mile below Klondike there is another “emergency” camp on the left seventy five feet above the river. It is located on a big 90 degree left turn (there’s a big cliff at the bottom of a riffle on river right).

The section between Klondike and Prelude is fairly uneventful. Lots of beautiful scenery, some fun rapids, and creeks cascading into the river with every turn. Keep an eye out for a huge pink rock on the river right bank. It’s around mile 17 and is a good marker for the start of more action. Prelude (also known as “Fawn Falls”) is a really fun rapid with a great airplane turn drop on the bottom left. A sneak in the right channel develops with medium flows (2000ish CFS).

Below Prelude an eerie calm sweeps the canyon. The approach rapid to Green Wall is visible. If no one in your group has been down here before, you may want to pull over above the entry rapid (on river left) and hike down to Green Wall. It’s a much longer hike than if you catch the eddy between the entry rapid and Green Wall, but it is also one way of guaranteeing that you’ll scout the rapid. Often times, the hardest part about Green Wall is simply catching the eddy.

The fun doesn’t stop after Green Wall. Pimp Slap (aka Little Green Wall) is just downstream and it is followed by a handful of great rapids. Submarine Hole is the last rapid of real consequence in this section. Just below Little Green Wall there is a camp on river right. There are also a fair number of camping spots below Submarine Hole. Collier Creek offers camping just downstream of it’s mouth (although it’s a little bit of a climb) and there are some very scenic camps every few bends. Horsesign Creek enters on the left at mile 29.5. There is a camp along the creek and this leaves you only one mile from the take-out. Most groups take-out at Oak Flat (mile 31.5) on river right.