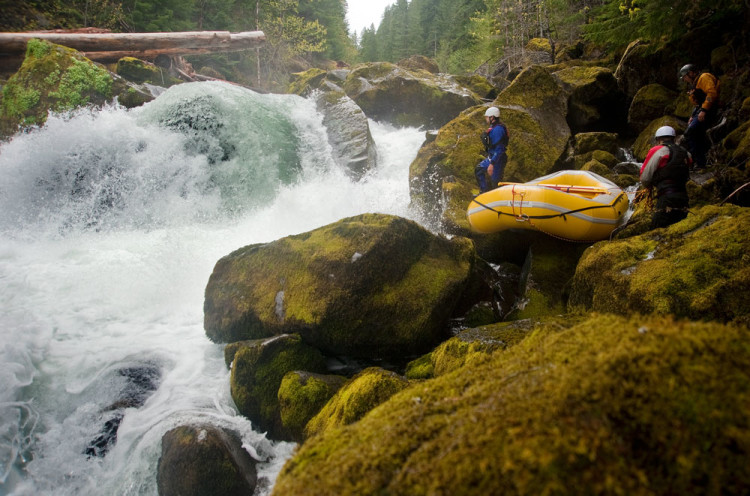 The entire time frame of an adventure can be broken into bits and pieces and, in particular, dots that mark significant turning points. There is always a first dot, the starting point, and a final dot, which marks the end of your journey. Each decision you make (another dot) often has a profound effect upon the remaining dots yet to be made. If your adventure involves kayaking or rafting, your journey normally ends as expected, at the final dot, someplace known as a “take-out” or access point along the bank of a river. 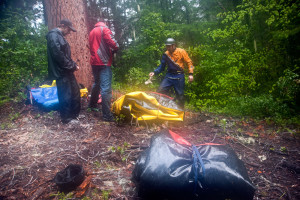 In a small clearing we rested. “How far above the creek do you think we are?” I asked Garret. The answer was maybe 100 feet or so. Not much, but it was steep and rocky, with a small cliff to start out, and we didn’t have a static line so our z-drag was going extra slow. It had taken three of us exactly three hours to move ourselves, our boats, and other miscellaneous items approximately 100 feet up and out of Fish Creek. We rested; and as we stared off in various directions I started picturing the dots that had led us to what was now a significant turning point in our little adventure.

It had started off about as normal as it gets for a group of people looking to get outside on some of Oregon’s rivers during Memorial Day Weekend. We’d run the Upper Rogue and from there headed over to the North Umpqua. We still had Monday to go boating and on Sunday afternoon the itch for an adventure hit some of us like a bad case of poison oak. I remember specifically saying something about wanting to find a creek off the beaten path. Willie, who is familiar with the area, said there was such a creek just six miles up the road from us. We drove over Fish Creek that evening and were ecstatic to see a good flow underneath the bridge. Our map showed a road that led right to the water and would give us about a five-mile run. Our adventure had been found and dot number one had sprouted.

Around the campfire that night we looked over our not-in-depth-at-all Oregon road map that had contour lines for every 300 feet in elevation. It seemed that there would be two particularly interesting sections on the creek. The first was within a quarter-mile of where we were putting in and the second was about a mile-and-a-half into the run where the creek would drop 300 feet in less than half a mile.

The next morning we packed up and drove to the put-in. The creek looked great. Dana, who was doing our shuttle and not at all enthused by our fabulous adventure, always asks me what time she should call for help. “What do you think? Six hours?” she asked. It was 10:00 and the whole run was only five miles long. We were all motivated to get it done quickly because of the drive back to Ashland. I thought for a second and replied, “Don’t get worried until it starts to get dark.” We pushed off. She drove back to the campground. And so it began. 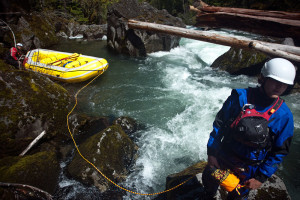 It wasn’t long before we came to a fairly significant horizon-line-jumble-of-rocks-log-gnarl. We pulled over on river-left and hiked downstream about a third of a mile. We’d be lining and portaging this one – all of it. But other than the huge drops, sieves, and logs it looked like it would have been a great rapid! So there remained a glimmer of hope for what remained downstream.

That glimmer came to life briefly as we managed to scrape a mile or so downstream without significant portaging or lining. The rapids were tight and technical and a few had some nice drops. But we weren’t making good time. We stopped and scouted everything and we did get hung up in a few places. Then, very suddenly, we came to a corner that reeked of heinousness.

The creek pooled up as it rounded a left-hand bend and slipped underneath a pile of logs. We stopped again on the left bank and my brother Skip and I started hiking. I stayed high and went quite a ways downstream. It looked like we’d be lining this one for sure, and I couldn’t see the end of it as the creek disappeared around a right turn. Garret joined us and mentioned he thought we could line along the left bank. It was now crunch time – we were definitely pushing the clock to get out before dark. It was after 2:00 and we probably had not gone more than two miles. If things continued like this we’d be in trouble. We decided to get back to the boats and begin the process of moving downstream.

Willie and Garret took to moving the small Avon while Brandon, Skip, and I worked on the much larger Vanguard. We moved as quickly as possible and had made it to where the creek began bending right when I heard a whistle blast, looked downstream, and saw Willie motioning for us to join him and Garret 100 feet down river. They did not look stoked. From where they stood the rapid not only continued to be huge, but it actually got steeper. In fact we were standing on a significant waterfall and it appeared that there was another one just downstream. What time was it? 3:00, which meant maybe three hours before it would start to get dark. We knew from looking at the map that there was a road on river-right roughly 500-600 feet above the river maybe one mile away.

Our choice was to either to risk continuing downstream and maybe not getting out before dark (and probably footing a search and rescue bill) or bailing on the trip, sending two people out to contact Dana to let her know all is well, and hiking the boats and gear out. We chose the latter. Put a dot there.

The first step in the process was to get the boats from river-left to river-right above a huge drop. Garret and Brandon went back upstream, crossed over the logjam, caught throw bags that were attached to the rafts, and pulled them across the creek into a small micro-eddy at the base of a cliff. When we re-grouped on river-right it was decided that Willie and Brandon would hike out while Garret, Skip, and I would begin the process of getting the boats started on what was sure to be an absolute nightmare of an experience.

And so there we sat, three hours later, a measly 100 feet above the river in a small clearing surrounded by tall trees. “Well according to the map the road is in that direction,” I said. We decided to go look for it. There was no way we would be getting the gear out tonight, we’d have to save it for tomorrow, but there was no reason for us stay with it until then especially since we didn’t know where the road was.

We started walking through the dense woods. “Holy shit…” all three of us muttered. We tilted our heads upward and stared at an enormous 300+ foot cliff that emerged through the trees. “Maybe there’s a way around it if we go further downstream?” We started hiking along the base of the bastard. After about a half-mile we took a break and then heard whistle blasts from back upstream. We returned them and soon were reunited with Willie and Brandon. They had found a steep and narrow gulley up the cliff, had found the road, hiked to the highway where they hitched a ride, and had caught Dana as she was driving in the opposite direction to the Ranger Station. That was a huge relief. They showed us their route and it wasn’t long before we were back in a truck headed to the campground.

That night we came up with a plan to get the gear out. The first step was getting a static line. Willie called a friend in Roseburg (Greg) who, not only lent us a rope and a bunch of extra climbing gear, but he drove it up to us that night (THANK YOU!). Our plan involved moving the gear in stages that would take a few laps each. From the small clearing we would move everything to the base of the cliff. From the base of the cliff we would z-drag everything up the gulley as far as the rope could go. We’d then reset the z-drag at the top of the gulley and get everything to the top. From there, it would be a quarter mile to the road. I figured we’d be lucky to get everything to the top of the cliff and would have to come back later that week to get it the rest of the way out.

Of course it rained all night and was especially cold the following morning. We packed up camp and left around 8:00 a.m. Got down to the boats around 9:00. We rolled the Vanguard so that it had four carry loops and then “one-two-three’d” it for an hour and a half to the base of the cliff. Up and over fallen trees, gaining elevation over huge boulders, squeezing it between narrow gaps between the cliff and trees, it somehow – magically – ended up at the base of the cliff. Next we went back for the Avon (which is about half the weight of the Vanguard) and the remainder of the gear. By 11:30 we had everything at the base of the cliff.

The z-drag went smooth. We had 180 feet of rope and nearly used the full length twice so the gulley was around 350 feet from top to bottom. It was 1:30 by the time everything was at the top. We were exhausted. It took two more hours to move everything to the road but we got it done by 3:30, exactly 24 hours after Willie and Brandon had begun their hike out to reach Dana.

There are few adventures I have been on where reaching the final dot has been so challenging and there are even fewer adventures I have been on where it has felt so rewarding. Normally, your final dot is at a place you’ve planned on. Perhaps the difference between an adventure and a misadventure is landing on a dot you weren’t expecting. And when that happens you must make decisions that make your future dots easier. Despite creating an absolutely heinous situation for ourselves we did overcome a tremendous challenge in avoiding injury, getting 100% of our equipment out of a tough spot, and staying positive. In order to accomplish those three things we made some good decisions after making one really bad one, which was putting on with limited beta on the run.

We arrived back in Ashland around 8:00 p.m. that night. Skip had gone back to Eugene so Willie and Garret helped unload the gear into my yard. Garret was headed back home to Shasta. Other than this weekend, we’d hardly spent much time together aside from a day of touring breweries in western Montana (actually that’s a good story too – maybe another time). When you go through an experience like we had it brings out everyone’s spirit, demeanor, and who they truly are; which is maybe what he meant when he responded to my apology about putting him through such a physically heinous ordeal with “Don’t apologize Will, I feel like we had some quality hanging out time together.” He’s right – when it comes down to it all of us involved in this adventure did spend some quality time together – and we won’t soon forget it.