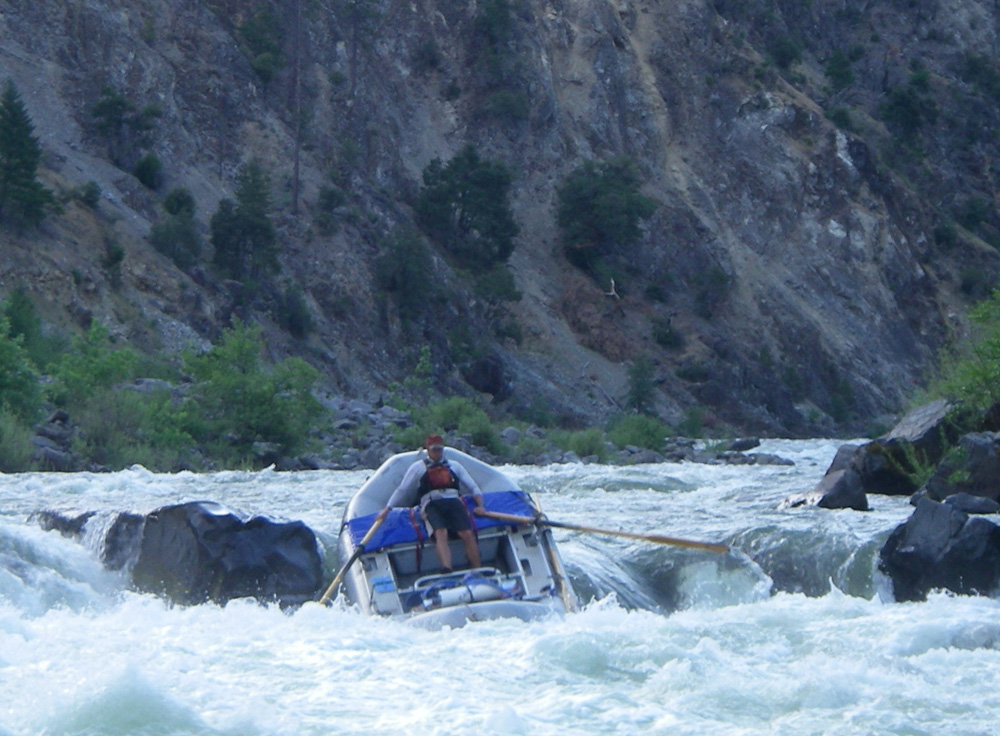 This last Saturday was the BLM sponsored “Rogue River Clean-up” from Hog Creek to Grave Creek. RRJ took a group of 26 students and parents from the Jacoby Creek Middle School to help pick-up trash. With flows just under 6,000 CFS, most of the trash was probably floating on downstream, however we still managed to pick up a lot of junk.

After the river clean up and lunch, Chip, Dana, and I headed back to Selma, cleaned up after the trip, and then drove down to Miami Bar on the Illinois. We left Selma around 8:15 PM on Saturday night and arrived at Miami Bar around 9:15. With a near-full moon over our heads, we pushed off at 10:00 PM and floated a quick mile to camp.

Due to the trip being somewhat spur-of-the-moment and mainly because we had no desire to spend time packing, here is what we had with us:

Clearly we have priorities.

We fell asleep under the stars and woke up to a beautifully clear morning. We got up and tried to find something to do like breakdown the kitchen but soon realized that we didn’t have a kitchen. I went to breakdown the groover and then realized that we didn’t have a groover. Next up was the fire pan but, alas, we did not have one of those either. So, we threw our sleeping bags in the boats and pushed off at 7:00 AM sharp. By 8:30 AM we were at Pine Flat. We passed Klondike at 8:50. Soon after we caught up with a group and decided to pull over and eat some brunch.

After filling ourselves with bagels and smoked tuna, we continued downstream and reached South Bend at 10:35 AM. As we floated around the corner at South Bend, the Illinois River Circus pulled out in front of us and stared blankly downstream. They weren’t moving at the same pace so we waited to see if they would pull over before Prelude. Another group ahead of them seemed to be scouting Prelude from every angle possible and, from the looks of things, the Circus Act was about to begin. We pushed ahead (to a few grumbling voices, sorry about that) and headed down to Green Wall.

At Green Wall our plan was to run through without stopping to scout and just see what happens. We took two different routes and both worked out fairly well. I entered center and Chip entered far left. At the bottom we hung out for a brief second before pushing on down. As we floated through the narrows below the riffle after Green Wall we looked back upstream and saw what appeared to be an upside down blue boat heading our way. Apparently, the Show had started and carnage had begun! The boat eddied out on its own before the riffle but some of its contents didn’t. An oar came floating down with a few other miscellaneous items. We were able to collect the stuff and put it on a rock on the river bank where we hoped they could find it later.

With circus music playing in the background upstream, birds chirping along, the sun beaming a glorious 80-degree ray upon our heads, evidence of carnage floating by, and icy-cold beverages within arms reach, all I could think was “damn, I love this river.”

We made it to Oak Flat by 2:30 PM and back in Selma by 6:15 PM. A truly wonderful trip with the best company possible.

Here are some pictures: