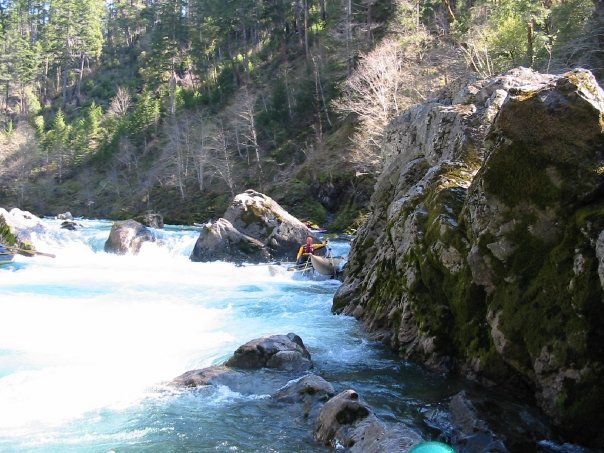 We left Portland mid-day on Friday and headed to Selma. The adventure truly began shortly after dropping the trailer at the Rogue River Journeys guide house when we decided to eat dinner at the bar in Wonder. Definitely a locals place, it was nice to see the community in full form. Jane (the owner) started it off with a good-natured “Who the hell are you guys?” The food was great and we felt very protected by Jane and her cash register pistol. After a few drinks it seemed like a good idea to buy one of their t-shirts, which we did. It gave me an idea for t-shirts on this site: “If you touch my boat…” (you’ll have to ask me about what the rest said)…

After our stint in Wonder, we drove back to Selma. Pete and Tom, who were driving from Carson City, got in just before the rest of crashed out. Woke the next morning to icy grass and 26 degrees. Pretty chilly. Got to the put-in a little after 8:00 AM. Aaron, Megan, Kynne, and Tyler met us there as well and soon we were on the water. Even though the gauge said it was under 900 CFS, it was definitely healthy and the tributaries were kicking in quite a bit. 900 when things are dry is certainly different than 900 when the streams are flowing.

Ate lunch in the scorching sun on the bar just upstream and across from Klondike. Here, the sunburns started to kick in and Aaron went for a swim to cool off. That certainly doesn’t happen on most Illy trips! Reached Green Wall a little after 3:00. We all caught the eddy upstream of the first drop, except for Alan who decided to just run through and snap photos from the bottom.

There were two options at Green Wall: Door A or Door B and the hole at the bottom drop was pretty small with a tongue just to the right. We all made it through without too much excitement and continued downstream. The rest of the way to camp was uneventful and we made it to the Waterfall Camp just after 5:00. It stayed light for another two or so hours and we filled up on a hearty meal. Brent passed around the Fire Ball, we had just the right amount of beer, and, thanks to our Dex Phone Book and the wood Doug brought, we had a blazing fire. We were the lucky ones!

It was another good trip on the Illinois. Made take-out just after 1:00 and got back to Portland at a decent hour!