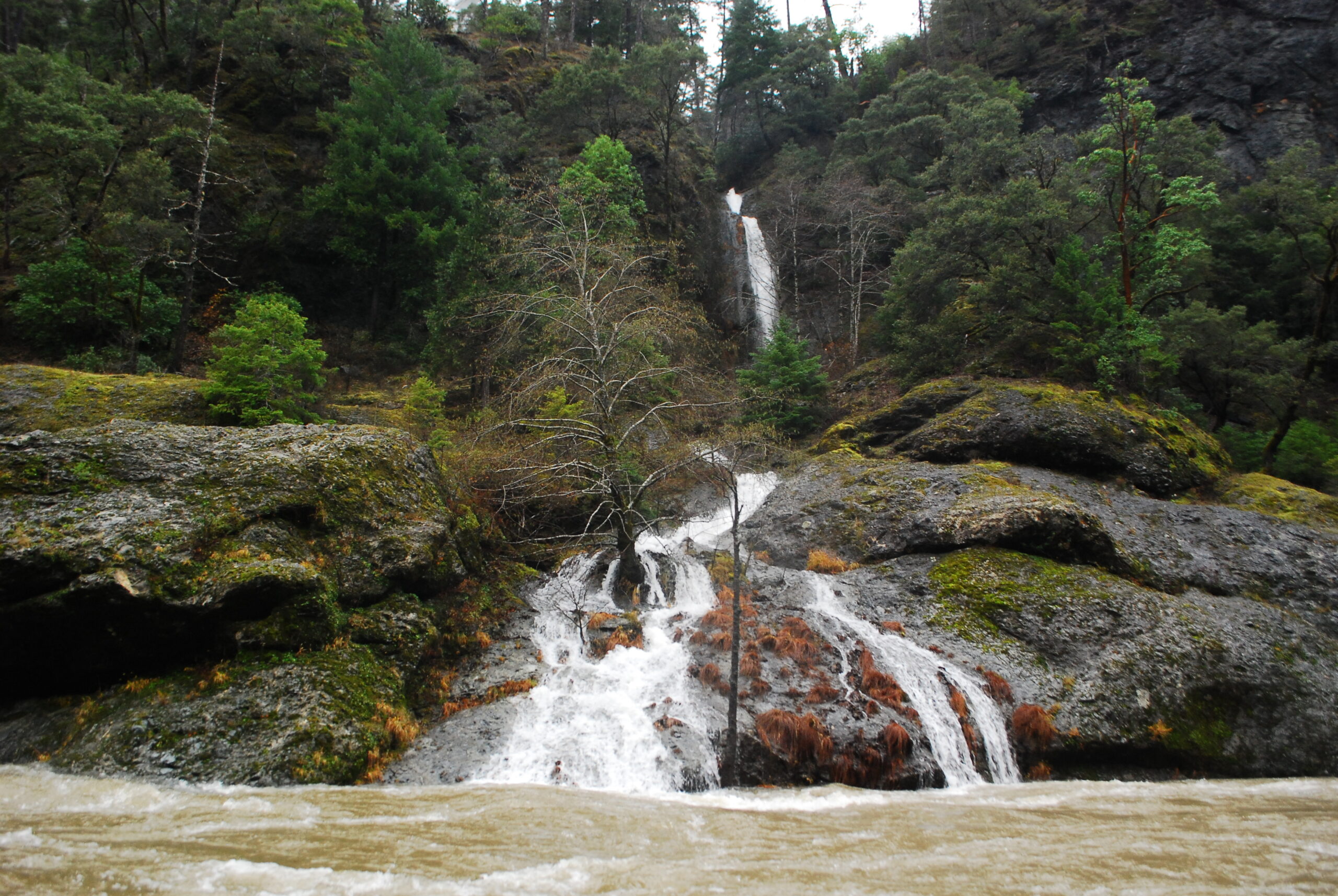 The Illinois River below Waterfall Camp. 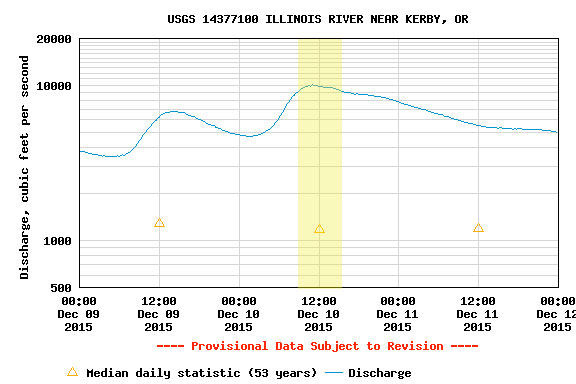 The highest I had seen the Illinois prior to this trip was about 4700 CFS in Kerby. I had chatted with Aaron Babcock in the past year about wanting to see it at higher flows and when the flows were projected to spike, Aaron called and asked if I was still game. Nate Wilson joined too and the three of us met at Ray’s in Selma at 8:00 a.m.

On this trip the river peaked at exactly 10,000 CFS. My goal was to get an idea for what it would be like to bring a raft in at this flow. My impression now is that I would not want to run it at this flow in a raft, but regardless I’ve made some notes about some of the places I think would be problematic for rafts.

Having never been in a Creature Craft I was a little apprehensive but at the same time I’ve seen plenty of videos of folks with seemingly no skill move these things down chaotic rivers so my thought was “if they can I can” and that proved true on this trip. The Creature Craft itself felt awkward to me with tiny oars and a tendency to rock side to side but I also would not have been on the river if not for this boat.

The Illinois at 10k trip notes:

• Below Miami Bar the first significant action occurred at Panther Creek. The boulder field on river left was underwater and you can actually cheat left around the left turn. Then move right. The last section of Labrador Creek is huge with irregular waves that could easily cause chaos in a raft and current flows quickly into Nome Creek rapids. It would be a roll of the dice to keep a raft upright in Labrador Creek.

• Nome Creek – the river bends right and you should stick to the inside bend. There are large reflection waves off the wall on the left at the bottom of the rapid.

• Above BFR – large waves but we cheated right. BFR was no big deal to the right.

• Rapid below BFR – we entered left of center and moved right. Some large holes to look out for but would not be terrible in a raft.

• York Creek – cheated way right against the bank. No problem.

• Upper and Lower Clear Creek – would be a very difficult rapid in a raft. At Upper Clear Creek you’ll want to go way right to avoid chaos near the wall on river left. However, at Lower Clear Creek you would want to be way left. Between the two is a string of huge lateral waves pushing left to right, with one very large hole. I couldn’t tell if the huge hole extended all the way to the left bank. If it did, it would effectively close off a left sneak. If it didn’t, you would want to take a raft way left, which would be a challenging move against the laterals. Starting the move right-to-left towards the bottom of the wave train (at the top of the left turn to Lower Clear Creek) is probably too late to get left.

• Pine Creek (Boat Eater) – you shouldn’t have a problem here left of center.

• Klondike Creek – the river was actually flowing over the gravel bar immediately across from the mouth of the creek. I cheated way right and the cut the corner but there really wasn’t much there. From there to South Bend the water was moving but it’s all easy read-and-run. It would be squirrely in a raft but shouldn’t be problematic.

• Prelude / Fawn Falls – the large boulders at the bottom were underwater and a large hole developed off the cliff on the left to the center of the river. Cheat right. I think in a raft you could cheat right against the right bank. There were some large waves right of center.

• Green Wall – still the crux of the run. We didn’t scout. In a raft you would. I think there is a cheat down the left but there’s also a gigantic hole formed by the scout rocks. We went right in the entry and right of center in the main rapid. There was a wave that was 20+ feet tall in the middle of the rapid followed by some huge laterals. Your chances of keeping a raft upright where we went would be slim to none and recovery of any kind would be non-existent immediately below Green Wall. The current moves quickly to the pinch below Green Wall, with some reflection waves coming off the left and a room of doom to the left of the pinch.

Once you are to Collier Creek you shouldn’t have any problems.