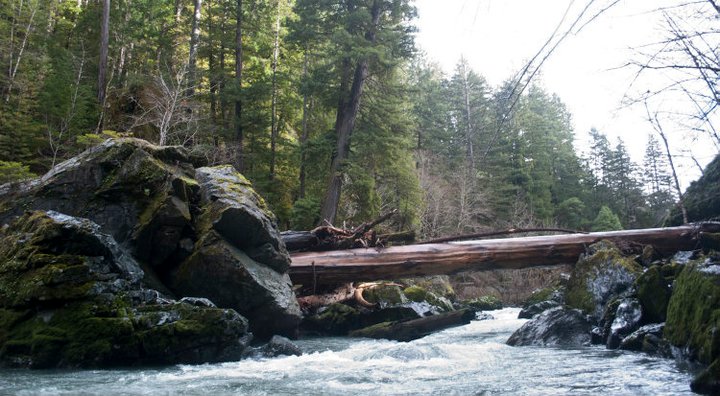 Redwood Creek at Orick, our take-out: Although the gauge nearest our put-in suggested the flow to be 250 CFS, it seemed like a lot more than that. Perhaps there’s a large tributary between the gauge and put-in, or maybe the gauge is broken. Either way, we were pleasantly surprised that we never had to drag the raft, which is what we thought we’d be doing the first few miles. In fact, the “creek” (this thing is a huge creek), chugged along at a fast pace. Despite the low gradient, the river always has current.

Since none of us had been on this river before, we relied heavily on information from http://www.cacreeks.com/redwood.htm. We were able to track down Kathy and her brother to help with our two vehicle shuttle, which is certainly worth the amount of time you save by not having to do your own shuttle. From Orick to where we put-in was about an hour and fifteen minutes. We were nervous about what the put-in would be like but ran into no problems. Coyote Creek comes in on river-right about seven miles downstream of the put-in. We stopped there for an early lunch break at 11:00.

The scenery was, as expected, spectacular. Within the first five minutes we spotted a bald eagle and a little further downsteam was a huge black bear. The river canyon is heavily forested and it is not too long before you are in the heart of Redwood National Park.

We unsure of how slow we’d be moving because of the “low” flow, so our group met at the Palm Cafe in Orick at 7:00 in the morning on Saturday. We were probably on the water by 9:00 or so and made great time downstream. Day one was mainly class II with a few class III/IVs, barring the one obvious class V, which we all portaged. The portage (river left) is somewhat brutal but not as bad as we thought it would be. All the kayaks went up and around the cliff and there is a faint trail that takes you through some really overgrown brush. You come back down to the river on a slide that feels like thick quicksand.

With the raft, I waited at the bottom of the drop and Brian pushed it out for a little ghost boat action. The boat had a great line and ended up parked at my feet at the bottom of the rapid. There is a sieve on the right-side of the rapid, but it didn’t look like the raft would fit in it anway, so we didn’t worry about it. Getting back on the water, there was one more rapid that had a huge redwood spanning the river well above water level. An annoying log was at river level that we snuck left of but it would be a problem at higher water.

After that, we went a little further downstream and found a great camp on river-left on a high bench. This was somewhere around mile 14 or 15. The total run is around 25 miles but the last 10 miles (what we had remaining) is all class I at 10 feet per mile. There was always current though and the scenery is phenomenal.

The next day we drifted straight to Orick, reaching take-out at 1:30.