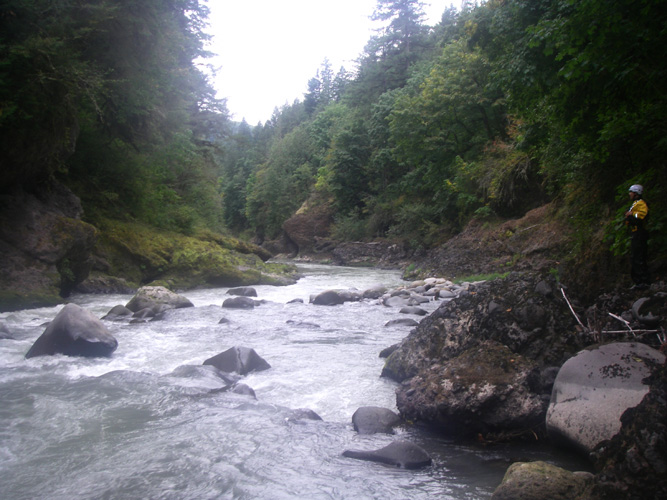 The Sandy River Gorge is beautiful. Skip and I were looking for something new for both of us and the Sandy fit the bill. Chip was kind enough to let us borrow his 8′ Mini-Me and it was the perfect boat for this run.

The flow was somewhere between 500 and 600 CFS which was low but definitely not the bottom end for rafts. Got hung up in two places, once in the first half mile at some gravel bar and then again right above the take-out in the middle of Revenue Bridge Rapids. Other than that, this was a perfectly reasonable run for small rafts.

We put-in at the end of the PGE Private Road. Access was not too bad. We took out at Revenue Bridge. Since neither of us had done this run before we didn’t realize the lack of traffic going up the road until we got there. This made hitching a ride pretty tough but eventually a local guy named Ron picked me up and took me all the way to the put-in. THANK YOU RON! Nice folks in this area.

Once on the water we were treated to lots of fun read-run whitewater. We stopped at a few places to take a peak and check for wood but in the Mini-Me stopping mid-rapid was a breeze. Saw two IKers out but that was it for people. One big steelehead so I guess the fishing is in.

Anyway, a fun run. Definitely looking forward to seeing the Sandy Gorge at higher water. Here are a few photos: