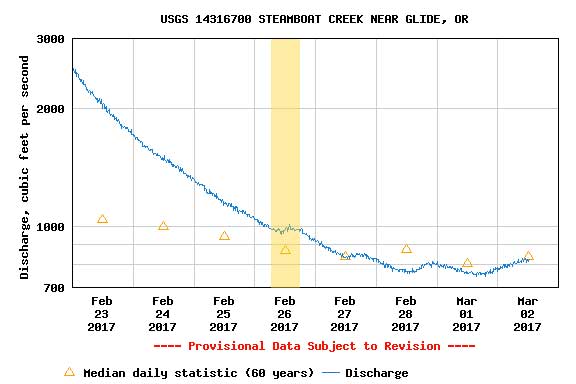 Through a misunderstanding of which section of Steamboat Creek to run, Glen Finch, Willie Long, and T.J. Eilers ran the lower section. If you look at other rafting forums it will go in to why it is a horrible run. I will say if you are looking for non-stop action or a casual day on the river you will not find either on this run. But this run does have everything in moderation and is actually a great training run.

The team wanted a full day on the water but one of our members was playing a gig and needed to be back in Canyonville by 6:00 p.m. We decided to put on where the bank was open and next to the road about three miles up from Steamboat Falls.

At 10:00 a.m. while putting on we enjoyed a mild snow storm. While rigging and rafting in the snow is absolutely beautiful it made everything three times harder and slower. Most of this section was mixed with slow moving current and Class II water. Before we arrived at Steamboat Falls there was one fun Class III rapid. We had previously scouted Steamboat Falls from the road and found an easy portage in the middle of the river. After undoing the bow line and pushing it off the lip of a not yet runnable waterfall we carefully climbed down the rock and continued on.

This is where it got interesting. Although there were a handful of very nice, possibly Class IV rapids, there was a lot of flat water and a difficult portages that involved lining rafts. If you choose to do this run with rafts and do not want to spend an hour and half portaging, there is one rapid in particular that is especially difficult. Lining through this particular rapid is not recommended. My recommendation is to carry your rafts past the rapid and lower them into the river from the mini gorge. There are trees to belay from and shelves to climb down. We did it the hard way. After another few miles you come to the last portage. At just under a grand we were able to beach our boat again and toss it over the water fall.

Another meandering mile or two and we reached our take out at the confluence of the North Umpqua. A little late – but don’t worry – T.J. made it to the gig in time. I like to imagine he played in his drysuit.