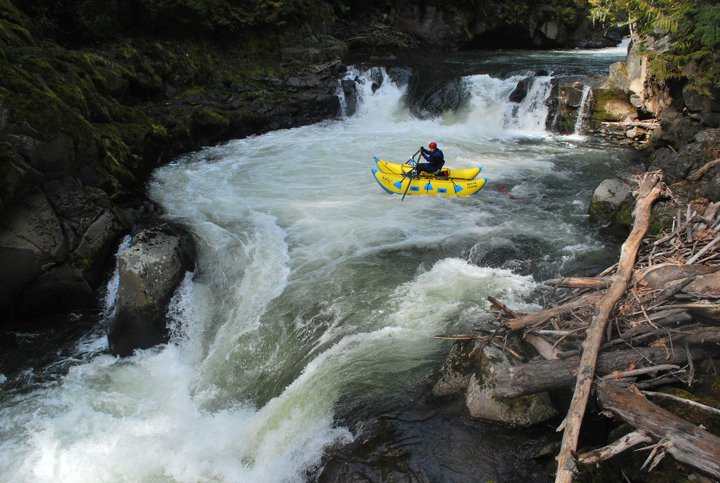 Trip report written by Will Volpert. Flow was around 3.3 feet.

I was driving up to Portland when Dan Thurber called and said the Truss would be good to go. Zach Collier and I had originally been planning a mellow day exploring Killer Fang on the Clackamas so at first I wasn’t too stoked on the idea. There was also a rumored trip on the Little White, but there was no way I was headed there. After talking to George White and Zach about the Truss it actually seemed like the makings of a great day so we agreed to meet the following morning in Hood River.

While George and I were driving to Hood River he called Hans Hoomans to rally the troops. Hans agreed to meet us at Husum with two of his paddling buddies and the next thing we knew we were at the truss lowering boats down to the river. The total group is Dan Thurber and Jeremy kayaking, George and I as an r2, Hans, Kira, and Tom as an R3, and Zach Collier rowing his cat. We had a bright sunny day and a great flow.

Everything was uneventful until Little Brother (we all portaged Big Bro) when George and I dropped off Little Brother a little too-far right as we were taking the river-right line. Our boat slammed into a rock at the bottom and I successfully body-checked George out of the boat – as well as myself. We self-rescued quickly though. Everyone else had gravy lines and we continued to Double Drop. Hans and his crew ran first followed by George and I. It felt like we had a sweet line but in the bottom drop the boat shot into the air and George went for his second swim. Zach portaged his cat on river-left and the kayakers both had good lines so soon we were headed downstream.

A little further downstream Zach decided to pull over and hike out. The wood situation at Lower Zig Zag was unknown and he didn’t want to deal with it. We bid farewell to Zach – and that’s when shit started hitting the fan.

We came around a corner and there was a log across the river. There was a fair amount of current, a small eddy just to the left where Hans had eddied out, and a little bit of water going over the top of the log on river-right. Feeling totally confident, I told George we could probably scrape over on the right. We paddled hard and both jumped into the front of the boat when we thought the bow had gone over the log. Whoops. The boat stopped and turned sideways. George jumped out onto the log and I tried the same but slipped and got caught on the upstream side. My arms and head were out of the water though and I was able to half way push myself on top of the log. But then the boat started to wrap around the log and, since I was lying on the log, it was wrapping on me. Hans ran across the log and helped George keep the boat from wrapping and drain the water. Once it was empty I was able to get out from underneath and the boat was slid onto the downstream side of the log. We continued downstream.

Upper Zig Zag was uneventful. We pulled into the eddy above Lower Zig Zag to see what was in store for us. It looked surprisingly clean. Hans and his crew pushed off and had a clean run. Next up was George and I and we slicked it. The two rafts were now eddied out downstream of the rapid on river-right. All we could see was the very tail end of Lower Zig Zag. Jeremy came down in his kayak and ended up upside down (after the vertical log). The new wood is about 25 yards downstream. He swam and immediately hit the new wood, but thankfully was far enough right to catch the end and bounce downstream. We took off after him, Thurber (who had a nice line through Lower Z) went after the kayak. Hans and his crew actually got to him first and pulled him in.

Now George and I were chasing after Thurber who had the kayak in his sights. We rounded the corner and Dan was trying desperately to bring the kayak to shore but it wasn’t happening. The current from the next rapid pulled it downstream. Dan ran through and immediately behind him the boaterless kayak pinned. After a little bit it filled up with water and actually came off but then it went into a little eddy of doom. George and I are eddied out above the rapid. Hans and his crew are downstream out of sight with Dan. The kayak is swirling in the eddy. There was no way George and I were going there, but just as we were about to push off the kayak somehow (I have no idea how) popped out of the eddy and headed downstream. We chased after it but after rounding the corner saw that way downstream Hans had grabbed it.

George and I relaxed momentarily, but only long enough to enter what appeared to be a nothing riffle. Well, a nothing riffle with one feature: an enormous hole. As we dropped in we both said “that’s a BIG hole” and proceeded to get throttled. George swam for his third time in about 3 miles. I was able to hold on and somehow the boat didn’t turn over. But it damn well should have.

We finally regrouped with everyone else. Jeremy had dislocated his shoulder so he was done kayaking. We rigged his kayak on the back of our boat and he rode with Hans.

Drama is over for the day, right? Wrong. We get to BZ Falls. Hans says he’s lining. I’ve never lined BZ and had always just ghost boated. Seemed like it would be faster. So George and I go downstream where you can jump in off the cliff to catch your boat. Hans pushes it off. It has a shitty line and at the base of the falls it flips over. The stern of the boat, where the kayak is rigged, is at the base of the falls getting hammered. The boat is never going to come out. Hans leaves to get beer at the BZ General Store. 45 minutes later he comes back and the boat has just come out. I feel like an idiot.

We run down to Husum. I’m tired of getting my ass kicked so we run the river-right channel. Hans runs the center drop and styles it. At take-out we’ve got some good stories and beer. It’s always good boating with George, Hans, and Dan and it was excellent meeting Tom, Kira, and Jeremy. If there is one thing that’s certain in this life: You can never have too many river friends.