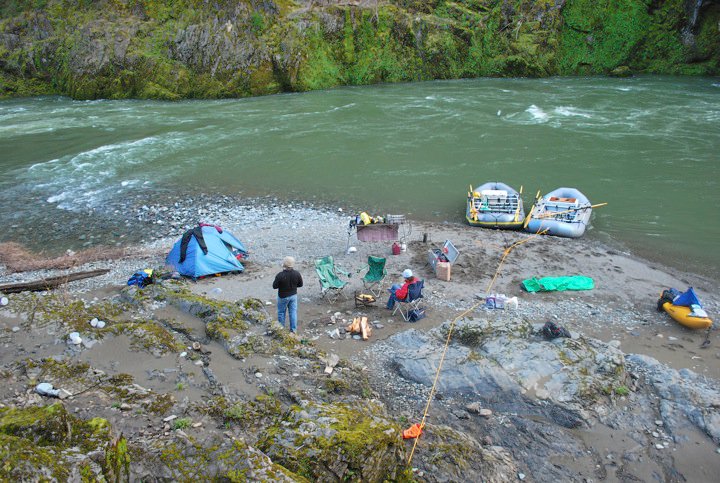 Will’s 24th birthday – He’s still a year younger than me, but who’s counting?

People started dropping like flies on Thursday afternoon, but several of us stuck it out. Will and I had been watching the snow fall all day on Thursday and the projected flows told us it would be well above 6000 cfs. Will knew it was wrong but we kept watching the copious amounts of moisture with a bit of skepticism. Friday evening we knew we were golden – the flows were around 3000 cfs and falling.

Ryan Guy, having just started his spring break, met us at the Selma house on Friday evening. In the morning we met up with our other gung-ho boating comrades, J.R. Weir and Jonathan Hyland. I have to admit the sunny drive in the morning was incredibly beautiful but a little nerve racking – there was a lot of snow on the road. I wasn’t too excited about a potential “high water” trip, but Will assured me the snow would stay put and the flows would be fine.

We put-in around 11:30 am as the sun gods shined proudly on the birthday boy. It was definitely Will’s day on his favorite river. After an amazing day of floating the green water of the Illinois, we arrived at South Bend around 4:30 pm and decided to call it a day. The night was complete with a more than sufficient supply of spaghetti, beer, Patron and tomato juice, Jaeger and Franzia’s Sunset Blush bagged wine. It was a relaxing and enjoyable evening of some of the best story telling and hooting I’ve been around in a long time.

The next morning everyone woke up with the thought of the impending GREEN WALL. After a filling breakfast, we hit the water and made it to Prelude around 10:30 am. We decided to scout above the entry rapid. We walked down, scouted and Will and Ryan headed back to the boats. I set-up our video camera on a rock, slung our digital camera around my neck and waited for the guys to come downstream. Will entered far left due to the fact that the center was a massive river-wide hole. It was definitely not a place you’d want to be… But after some strong pulling and maneuvering he made it out clear and clean. It was a great run. The bottom hole (also known as Harvey) wasn’t too prominent, which made the run a bit easier. Ryan and Bigwater Betty, the creepy mannequin head, had a similar run and came out looking like professionals. Of course it was a piece of cake for both J.R. and Jon.

After Green Wall we navigated some of the lower rapids while we admired the many waterfalls, runoffs and creeks surrounding us. It was absolutely beautiful. Will made sure to stop at his favorite “Waterfall Camp” and was blessed by the river gods in discovering his bottle of stashed Jaeger was still in camp. We basked in the sun and told stories.

As we made our way further downriver, we decided it was time for lunch. Instead of eating at the waterfall camp or pulling over, we took customized sandwich orders, compiled glorious piles of meat, cheese, veggies and bread and ate while we floated. I think some of the most hilarious moments of the trip were watching J.R. and Jon eat while they kayaked. It’s a little easier for rafters to eat while floating, but kayakers…that’s a whole other story. However, it definitely wasn’t difficult for them to take swags off the good ol’ bag of Sunset Blush. Thank god for bagged wine…

We made it to Oak Flat around 4:00 pm, enjoyed some more Sunset Blush, packed up and headed back home. It was really one of my favorite trips down the Illinois. We had perfect flows, perfect weather and a spectacular group of people. Thanks to Barefoot Brad and Jamie for a great shuttle experience. And to Ryan, J.R. and Jon for making the trek to Southern Oregon to enjoy one of the most beautiful rivers in the Northwest with us.