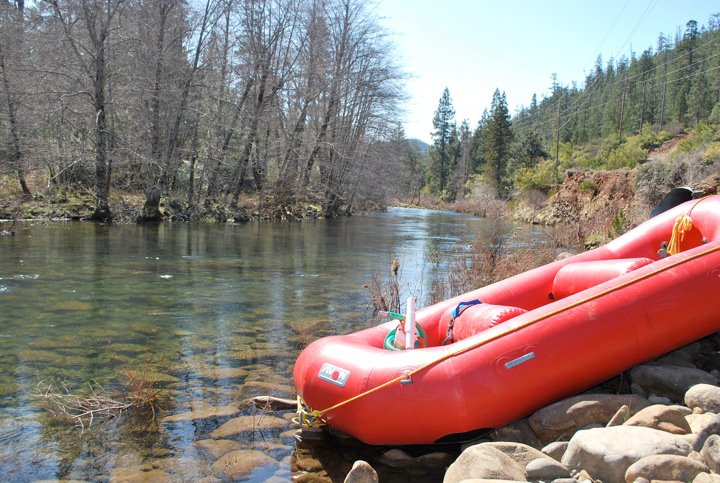 Since there is no gauge for the West Fork the best thing to go off of is the Illinois gauge in Kerby. Ever since I moved to Selma I’ve been wanting to get on some of the upper stretches and tributaries to the Illinois River. In January I got to run Josephine Creek, which was a lot of fun but not a whole lot of whitewater. There’s gotta be something somewhere up in the drainage where there’s great whitewater. Was the West Fork of the Illinois the gem I was looking for? No, but it was still fun exploring a new run.

We left our house around noon. We grabbed the little 10′ Avon and drove to the bridge over the West Fork on Waldo Road. There we left a car and continued with my truck to the put-in. We didn’t really know where the put-in would be, but we knew which road to take. When we entered Obrien we took a right on Lone Mountain Road and continued up the road a few miles. Eventually we found a place where the road was right next to the river so that’s where we put in. We did drive up a little further but it seemed that the road was straying from the river.

Due to the extremely low flows during the summer there is quite a bit of brush that grows in the river bed. This was a constant battle for us. We had to get out of the boat and “portage” three times. More times than not we could pick out a line over the smaller bushes and the boat would just knock them over. Nevertheless, the river canyon was beautiful and the rapids, although only class II, were still kind of fun. At least there was current!

We arrived at the bridge take-out around 2:45. On river-left just upstream of the bridge there is a little steep trail to the road. We used that to carry our stuff up to our vehicles.

Would I do the West Fork again? Probably not. But I’m sure glad I don’t have to wonder about it anymore!