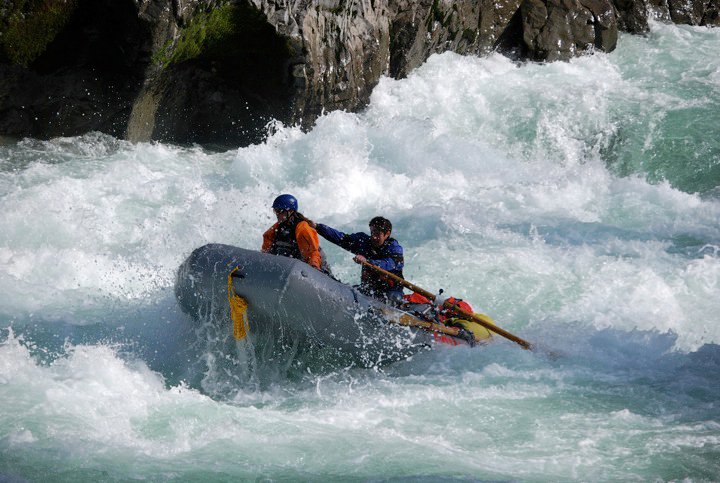 Trip Report by Will Volpert. Flow peaked somewhere around 1350 CFS. On Friday evening we drove in to Miami Bar. Zach (Northwest Rafting Company), Pete (Momentum River Expeditions) and Dan didn’t get in until 2 AM. The rest of us were already asleep at the new camping area near Miami. We had Mr. Moody’s entourage from Idaho: Makael and Mike. From Washington we had Morgan, John, and Mike B. Then there was Dana and me, Kelly from Portland, and John B from Eureka.

We awoke to what seemed like the perfect day on the Illinois. The sun broke free as we rigged our boats and then we were on the water. After an uneventful morning we stopped at Pine Flat right for lunch. Our original plan was to get down to the waterfall camp for the night, but upon reaching South Bend we were happy to call it home. An upstream wind had picked up and it had been a long day in the sun. It felt like it was around 5:00 but after checking a watch it was only 3:00. Dana started showing the guys from Washington how to drink Fireball Whiskey. That didn’t last too long though…

The next morning we got on the water, ran Prelude, and then some of us caught the scout eddy immediately above Green Wall while the rest hiked down from the top of the entry rapid. The hole at the bottom looked meaty. Pete, John M, and I ran through first. At the bottom of Green Wall we got to watch John M. dance around in the hole at the bottom before the cat flipped up and over. Next up was Dan and he had a great line. John B came down after him and ended up center at the bottom. His boat looked like it was going to flip, spit him out, and then proceeded to surf for 20 minutes. Pete and I hung out in the eddy as most everyone else tried to get a rope to the boat. Eventually it popped out on its own, we got it to shore, and Mike B and Morgan came down in their cats.

Got to take out around 3:00. Overall just an incredible trip. Thanks everyone for coming! Hope to boat with you all again soon.