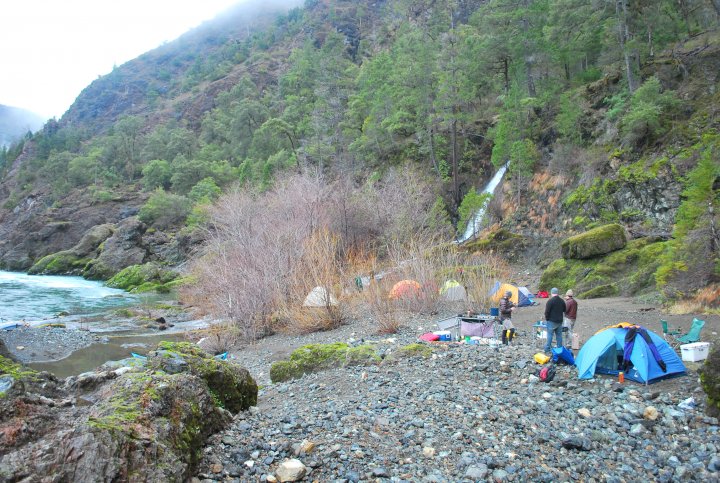 Everyone arrived in Selma the night before the trip. John introduced some of us to Fireball Whiskey and we didn’t hit the hay until about 1 AM. With a more-than slight headache we awoke the next morning and tried to load as quickly as possible. The game plan was to get below Green Wall, which is roughly 18 miles downstream of Miami Bar. Tyler arrived at 8 AM with his big truck and trailer and soon we were on the road headed to Miami Bar. Pushed off from Miami Bar a little after 10 AM.

Water level was great. The rapid section after Panther Creek was awesome with some big waves. Scenery was good as usual and weather was surprising warm and just barely drizzly. We ate lunch at Pine Flat. Pine Flat to South Bend really flies by. Surprisingly, about three miles above South Bend on river right we came across a herd of elk. Once they spotted us they scrambled up the hillside. I would never expect to see elk at the river on the Illinois – this river is full of surprises.

At South Bend we did a sand drawing of what Green Wall would look like, where the eddy was, etc. There were a few folks who had not been down before. Dan and Jonathan in their kayaks ran the entry rapid first and caught the eddy, followed by John and me. Next up was Hans and George, who were R2ing, and Ryan who was rowing an Avon Adventurer. In the entry rapid, Ryan’s oar got locked in the oar lock and he struggled to get it back in. He went screaming by the eddy so Tyler and I gave chase. We watched Ryan’s boat drop over the ledge hole sideways and I thought it was game over but somehow the boat flushed through upright. We snuck way left and then cut back right, not far enough though and got dropped into some manky stuff in the center but popped out unscathed and found ourselves in the bottom eddy with Ryan.

John ran through next and had a sweet line. Way left, way right, and back to the center. Pretty much picture perfect. Next was George and Hans. They had a nearly identical line as Tyler’s and mine and dropped into the center mank. Lastly were Dan and Jonathon and they both had stellar lines. After shooting some photos and taking some shots of Fireball Whisky we continued our way downstream. Everything went smoothly with the exceptional of an exciting surf at the top hole of Submarine (the boat didn’t turn over though!). Finally it was time to take the helmet off, crack a beer, and get down to Waterfall Camp, which, on this particular day had two thumpy waterfalls.

The next morning we woke up to warm temperatures. We got on the water around 10:00 and found ourselves at Oak Flat around noonish. The sun came out and we loaded everything up in the blazing heat. Another great trip down the Illinois was exceptional folks!