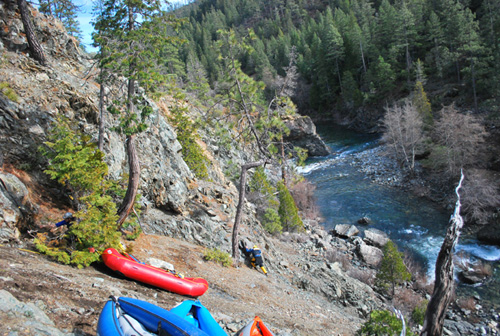 Written by Will Volpert. Although we were floating on Josephine Creek, there is no gauge so your best reference is the Illinois. Here it is:

If there ever was such a thing as a “Classic Class II Run” it would be Josephine Creek. Dana and I scoped this one out in the Fall of 2009 while exploring our new home territory. It looked great. At the time, the Illinois was flowing a touch under 1400 CFS and Josephine had a substantial amount of water in it. Keep in mind that Josephine enters the Illinois a few miles below Kerby, which is where the gauge is. There’s no gauge for Josephine and, in fact, there is really no information on it other than historical notes linking it to the first gold discovered in Oregon (which was by a gal named Josephine, a miner’s daughter) and that the county was name after the discoverer (hence, “Josephine County”)

Who was on this trip?
Scott Malone of Rogue Wilderness
Pete Wallstrom of Momentum River Expeditions
Tyler Averyt of Galice Resort
Aaron Stone of Noah’s Rafting
Will Volpert of Rogue River Journeys

We parked my truck at the $8 Bridge and then took Tyler’s truck up Josephine. We stopped once to check the flow at a mining site, and then continued up into Fiddler Creek. HEADS UP: If Fiddler didn’t have wood in it… it would be an epic/awesome run. We turned around and went to the confluence of Fiddler and Josephine. Found a road to the tree line, walked down to the canyon to find an access point, and then started huffing stuff towards the creek. We only had to carry a little bit but the last part was steep. We ended up roping everything to the creek – which, by the way, looked spectacular.

Pete and I were R2ing a 10′ Avon “Rosie” and everyone else was IKing. The creek offered spectacular scenery. It was stunning. The water was the clearest I’d ever seen. Making it even more rewarding was the thought that we were probably the first ones to float this stretch of water (if anyone knows differently please let me know). It was class II, but there never was a really long stretch of flat water. In total we floated about 4.5 miles.

At take-out we ran into a local who was out on his dirtbike. He told us about access even further upstream of where we launched. I’m sure you’ll see a trip report here within a few weeks about access. Overall, awesome trip. Great people, beautiful creek… Can’t beat either.