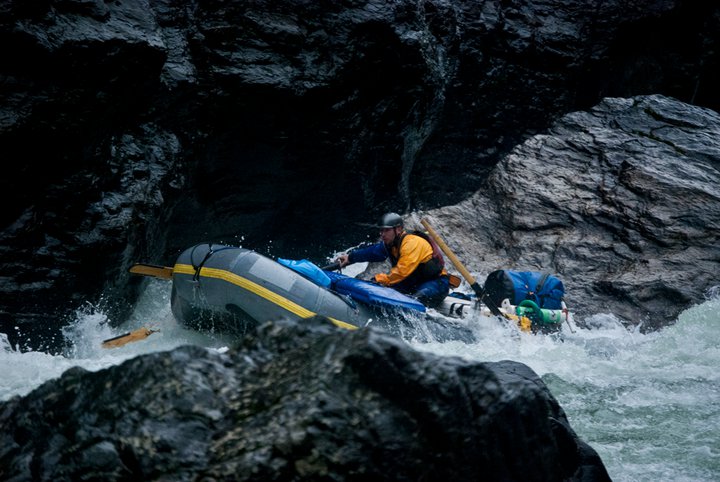 A group of 7 floated the Illinois this past weekend. Dana and I brought an oar boat and joined five kayakers. In kayaks were Nick, Chris, Jodi, Lisa, and Brian from Waterdogs. We met in Selma at the Rogue River Journeys house and from there drove into Miami Bar.

We launched sometime around 10:30 or so and made it down to Pine Flat for lunch. After lunch we made a pit stop at Deadmans. I had never seen it before and was amazed by how much space there is. It’s a little bit of a carry, but seems to be well worth it. After getting back on the water we made our final destination for the day at South Bend, but not before seeing a nice black bear across the river standing on its hind legs scraping for berries.

Until recently I had always thought that South Bend was much more of an “emergency” camp than a place to plan on staying. It always appears much smaller than it actually is and from river level does not look particularly flat. However, the place has grown on me and after having stayed at South Bend quite a few times in the past few years it is now one of my favorite camps anywhere. The gorgeous view it offers looking downstream, coupled with the creeks coming in across the river upstream, make it incredibly scenic. Plus, there is space for quite a few folks. If water was on the rise I would definitely hesitate staying here for two reasons: 1) you’re still upstream of Green Wall and the gorge below and 2) the pebble bar would probably disappear with a high flow.

The next morning we geared up and headed down to Green Wall. Prelude was uneventful. Upon stopping to scout Green Wall, it appeared the water was low enough so that the middle door in the top drop (Door “B”) was closed off for the raft. Door A had a good sized hole at the bottom of the drop, but with no real other option that was the place to go with the raft. After Chris ran through in his kayak (there was space for kayaks to go in door B) I ran through next. The boat punched through the hole and before I knew it I was backwards slamming into the wall at the bottom. After a short highside, the boat pivoted off the wall and I was home free. Not a pretty run but it worked!

Brian followed with a nice run and the next thing we knew we were at Pimp Slap (Little Green Wall), where I proceeded to get Pimp Slapped between the bottom rock and wall. The kayaks had great runs through. Next up I got slammed into another rock in a no-name rapid, had to ask Dana to highside, and we slid off. At Submarine Hole I hit the left bank about as hard as anyone possibly could, thus completing the worst three miles of boating I have done in a very long time! Fortunately for me (and Dana), there really aren’t any more sustantial rapids below Collier Creek, otherwise I probably could have found a way to really screw up.

We stopped at Waterfall Camp for lunch and then headed downstream to Oak Flat, arriving sometime around 2:30.

Here are some photos from the trip: