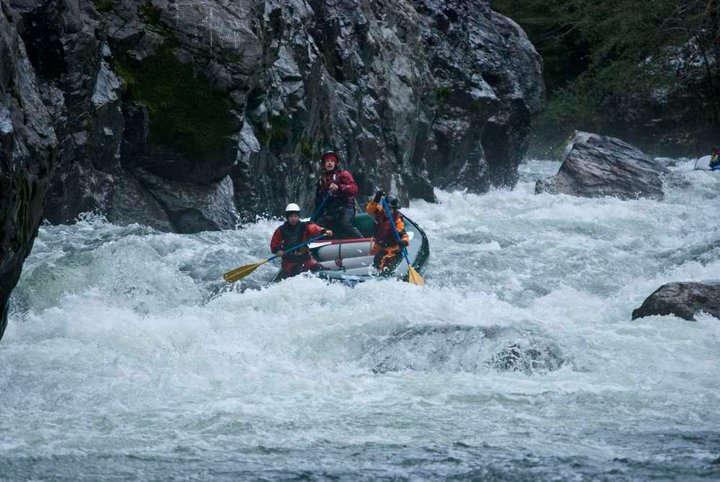 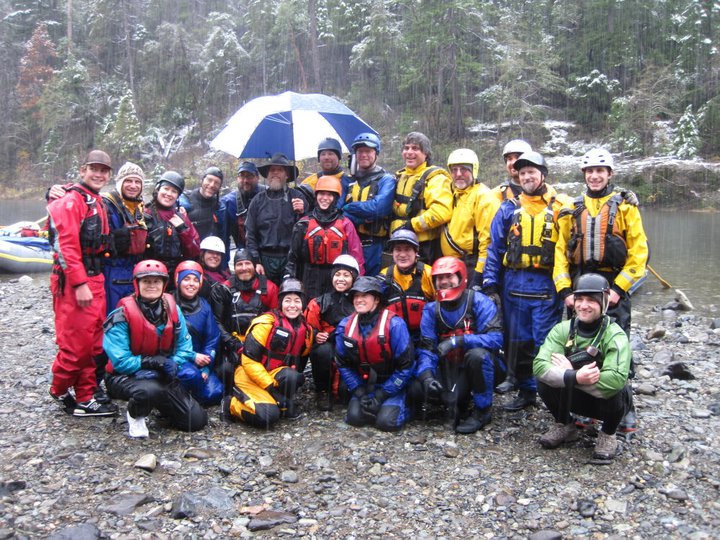 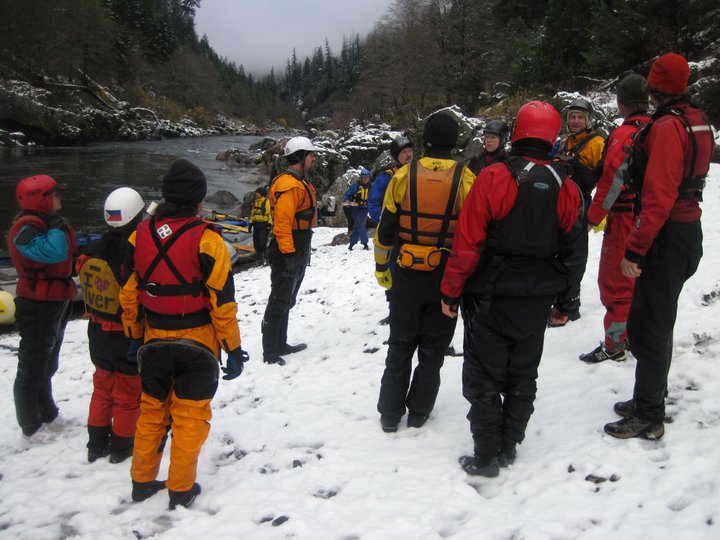 It was John Ruskin who said, “Sunshine is delicious, rain is refreshing, wind braces us up, snow is exhilarating; there is really no such thing as bad weather, only different kinds of good weather.” And it is I who calls Bull Shit, John. It should be re-written as: “Sunshine is warm and nice, rain is wet and makes things damp, wind can be heinous and snow is really friggin’ cold, but the best memories don’t come from sun.”

The best memory-maker is the tried-and-true hypothermia inducing sideways-sleet-snow. I don’t know how John would describe it, probably something like “the mating of love and honey” but the metaphor I would use to share its glory would be similar to getting scissor kicked repeatedly in the neck and then dunked in an icy concoction of baby vomit and dog crap.

It was a sideways-sleet-snow kind of morning in Selma, Oregon, on November 20th, 2010. In attendance were 29 folks, 14 rafts and catarafts, 3 kayaks, 1 very cold keg, and a grand total of 290 completely numb fingers. In an impressive show of a complete lack of conventional wisdom, we’re now driving to Miami Bar, which sounds like a place to order a tropical beverage and relax on a palm tree laced beach, but I can assure you it’s not. It’s the access point to the wilderness section of the Illinois River where most trips begin. From Miami Bar to Oak Flat, the “take-out”, the river flows for 32 miles within one of the most beautiful river canyons in North America.

By the time we had gone eight miles downstream nearly everyone was frozen. We decided to camp at Pine Flat, which was a little worrisome because the water was low (only around 800 CFS). From Pine Flat it is 24 miles to Oak Flat. The ground was covered in three inches of snow, which made for difficulties carrying all of our gear up the slope. The following day we were on the water by 9:00 and at take-out by 4:00, an impressive feat considering the size of our group, the low water, and the cold weather.

I’ve been thinking about why people would do this and, even more intriguing, why they want to do it again. Although trips like this can be miserable at the time, looking back on them offers great memories and a renewed sense of life. It’s what I call the aftertaste of adventure and it’s the antithesis of a hangover. Also, it must be a good thing to be outside, to overcome obstacles, to exercise, and to feel so alive at the end of an adventure.

With this in mind, I started thinking about why more people don’t do this. Why are more and more people content playing video games on their computer rather than walking in the rain and splashing in puddles? Seriously, what are you going to remember? A day of poking on Facebook or a day of freezing your ass off with friends alongside a beautiful river?

Get outside people. Get your hands numb and stand under a tree. Set up a tent in the rain. Build a campfire and pass around a bottle of whiskey. If you don’t have a story to tell, you will soon enough.

For those who don’t know how to start, I’ve spent my morning writing about my favorite river and how, you too, can find yourself at its put-in with snow blowing in your face. Before I begin I’ll leave you with this:

“So get out there and mess around with your friends, ramble out yonder and explore the forests, encounter the grizz, climb the mountains. Run the rivers, breathe deep of that yet sweet and lucid air, sit quietly for a while and contemplate the precious stillness, that lovely, mysterious and awesome space. Enjoy yourselves, keep your brain in your head and your head firmly attached to your body, the body active and alive, and I promise you this much: I promise you this one sweet victory over our enemies, over those deskbound people with their hearts in a safe deposit box and their eyes hypnotized by desk calculators. I promise you this: you will outlive the bastards.”
–Edward Abbey

There’s a lot of mystique amongst boaters about the Illinois River. With any river you’ve never run before, it’s always somewhat of a hassle to figure out logistics and the Illinois is no different. In reality there’s a road to the put in, a road to the takeout, various shuttle services, and the stretch is only 32 miles long – logistically it’s a piece of cake.

Like most coastal rivers in the Pacific Northwest, the Illinois flow jumps around a little bit. During the summer the base flow is around 40 CFS. As fall rolls around and rain starts to fall, the base flow gradually increases so that at the end of each storm (and subsequent spike) the base flow is a little bit higher. It gets to a point once everything is saturated for the winter that, even without rain for a week, the Illinois will hold above 1,000 CFS. What gets folks worried are the spikes that occur hand-in-hand with Oregon’s notorious downpours.

The most widely accepted window to run the Illinois, in terms of flow, is between 800 CFS and 3,000 CFS. The gauge is roughly 30 miles upstream of Miami Bar in a town called Kerby and between the two are numerous creeks, big and small, that can add substantial flow. However, the only gauge is in Kerby, so that’s what you use. Despite the fluctuating flows and the narrow window, I would venture to say that the Illinois is the most consistent free-flowing multi-day river trip in the West, which is probably the exact opposite of what you’ve ever heard.

Here are the stats: historically the Illinois breaks 800 CFS by the second weekend of November and remains, on average, above 800 CFS until mid-May. The base flow during this time frame is never above 1500 CFS, which means that with a few days of no rain, the river is likely to be between 800 and 1500. If we say the boating season is between mid-November and mid-May, that gives us six boatable months. Compare that to the Middle Fork of the Salmon, which is about four months, or the Upper Kern, which is around three months, and you’ll understand that this is a long season.

There’s this damn cliche running through my head when I think of why it is a common belief the Illinois is fickle and hard to get on. And I’m sorry to even write it here because it sounds so lame but here it is: “You miss 100% of the shots you never take.” Thank you, Michael Jordan, for your infinite wisdom. It certainly rings true on the Illinois.

I can’t count the number of times I’ve run the Illinois at great flows that weren’t predicted three days ahead of time and the predictions had caused someone to bag out. Why is that? There are a whole lot of reasons you might decide to cancel a trip but the three big ones are these:

1. You are worried about flows.
2. You only want to go if the weather is nice.
3. Your contingency plans suck.

The first thing you ought to do is cross out #2. That should never be a reason to bail on an Illinois trip. Most of the time the weather will not be ideal, so if that’s a reason to not go you have now successfully made the Illinois the most difficult river to catch a trip on. Congratulations.

Because the Illinois is in a weird place geographically for most folks it takes some driving time to get there. No one wants to drive all that way and then have the disappointment of the flows not being right. But there’s good news. The Smith River is only 45 minutes from Selma and offers everything from class II to class V. Something on the Smith will be running if the Illinois is too high. If the Illinois is too low, chances are the Smith is too, in which case the Rogue is your best bet. So now, even though you’re not on the Illinois you still get to be on the water, which is a whole lot better than a stick in the eye.

At this point you have now narrowed down your reasons for not going on the trip to one factor: flow. If flow is your only concern you are going to get on the Illinois a lot because, like I said before, the Illinois is the most consistent free flowing multi-day river trip in the west. Just about everyone either uses the USGS website or the Northwest River Forecasting Center’s website to check the Illinois gauge. The nice thing about the NWRFC is that they show predicted flow. The downside, however, is that it is consistently wrong. It is a good indicator as to which the direction the flow will be going (up or down) but not so much of a good source for where the flow will end up (top of a peak for instance).

Whenever I plan an Illinois trip I constantly check the predicted flow because it’s fun, creates anticipation, and is wildly bizarre. I try not to get too excited because chances are I will wake up the morning of the trip and the flow will be way off from where they had predicted it to be three days earlier. Which doesn’t really matter at all because the only reason I wouldn’t go on the trip is if the water is too high or too low regardless of where it was predicted.

Most trips on the Illinois are multi-day trips, which means the flow is likely to change while you are on the river. This is the only time you ought to make a decision based on predicted flows. If you are launching at 2000 CFS and the predicted flows have it spiking on the afternoon of your first day you may want to consider heading over to the Smiths. I’m not going to tell you not to go because, well, I’ve put on in that situation, but you better think about what you’re doing.

And that just about wraps it up. The bottom line is if you reduce the number of excuses for not going to the only one that is critical (the flow), your chances of getting on this beautiful river are very good. And if it’s snowing the aftertaste of adventure will be with you even longer.